I’ve been to Paris many times but the visit that sticks in my mind as being a real ‘experience’ is the time I went with mum and dad for my mum’s 50th birthday.

After boarding the Eurostar at St Pancras, dad and I decided that 7.30 in the morning was definitely not too early to start drinking wine. Fortunately, the hotel was close to Montmartre Metro Station and dead easy to find. ‘Dead easy’ is a cringy pun because what made it easy to find was its proximity to Montmartre Cemetery.

My mum has this weird obsession with hotel teasmades and would have spent out first day in Paris sitting in the hotel making endless cups of tea if we hadn’t dragged her out. The first thing I wanted to show mum and dad was the Champs Elysées. As we exited the Metro at the Arc de Triomphe, mum and dad stood transfixed. Were they staring at the splendour of the Arc or the grandeur of the Champs Elysees’ majestic buildings? No, they were watching the cars going around that massive roundabout. To be fair, the roundabout did have about eight lanes and there appeared to be no rules as to who had right of way or where one was supposed to give way and a crash seemed inevitable. After fifteen crash-free minutes or so, I managed to pull them away.

They behaved themselves all the way to the Louvre where they walked around looking at paintings for about two seconds each. That was until we reached the Mona Lisa. Thronging humanity filled every corner of the room and came from every corner of the globe. The huge vaulted ceilinged room felt small with so many people in it but oddly when my dad proclaimed, very loudly, that the Mona Lisa looked a lot like Sonia from Eastenders, they all seemed to be looking at us. Mum remarked that it was ‘quite small actually’ and we headed out of the museum.

At dinner that night, dad and I realised that the wine you get in Paris, even the relatively cheap stuff, was quite simply the bollocks. After which, mum went back to the hotel to spend some quality time with the teasmade while dad and I went to the nearest pub which happened to be an Irish bar. The barman was not Irish nor did he recognise that my dad was Irish by his accent.

The next day we headed up to the famous Montmartre Cemetery because mum and dad have a slightly macabre sense of humour. Or so I thought, without realising quite how far it went. Standing over the grave of Alexandre Dumas, I heard dad saying, “Pen, Pen.” (My mum’s name is Penny) “Get the camera.” The camera was in my handbag. I took the camera out and was about to hand it to mum when I saw what they were up to. Mum was standing outside one of those small gated mausoleums the cemetery is filled with. Dad was inside. “Pen, take of picture of me through the bars,” he was saying.
Oh God, I thought and looked around to make sure no one was watching.
“Why don’t you pull your trousers down and pretend to be going for a poo?” mum said.
“No, no,” I half shouted, half groaned at them. “Just get out of there, dad.”
“I’ve got to get a picture,” Mum said.
“Take the bloody picture then,” I said, thrusting the camera at her before turning away to pretend I didn’t know them.

Having acquired a taste for grave yards, we headed to Pere-Lachaise Cemetery where Oscar Wilde and Jim Morrison are buried. I was trying to have a moment with Oscar Wilde’s monument but dad kept going on about desperately needing a crap so we were forced to quickly head to a nearby café to have a coffee while dad paid a visit. After that, we visited Notre Dame but we didn’t go inside because mum said, “It’s just another bloody church really.” Also, a previous time I was in Paris I nearly got arrested in Notre Dame but that’s a story for another day.

The next day we due to go home, so spent most of the day, up to that point, sitting in an English pub watching the football. I don’t even like football. 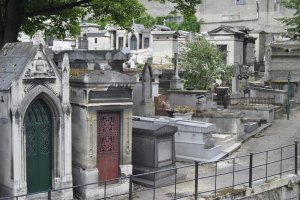 A single woman in her 30s who has random, bizarre and sometimes mundane adventures.