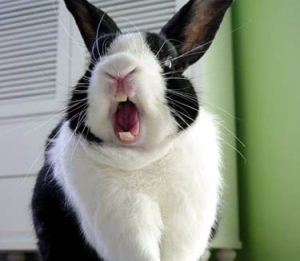 After a relationship break up, the person who wants some kind of revenge, like stalking, or harrasment.

“Man, I can’t believe Kate, after we broke up she keeps ringing my place and hanging up when I answer, she turned into a bunny boiler for real!”

I love that example of how to use it in a sentence.

For my friends and I, the phenomenon of the ‘bunny boiler’ is something we just can’t get our heads around. This may be because we are the sort of women who have lives that do not revolve around men and relationships. The concept of spending so much time and energy on someone you have broken up with is completely bonkers to us. Yeah, we’ve all been treated badly by people and been angry about it. That’s fair enough. We’ve all ranted and raved to our friends to the point where we can see them getting really bored of it but, normally, I would have thought, this would fade after a few weeks. Recently, I was absolutely spitting furious at someone who had humiliated me in front of my friends and I drove everyone round the twist with it for at least six weeks but I can’t imagine actually giving the twat the level of thought it would take to exact revenge. Clearly, bunny boilers do not see things this way.

Up until now, I had never encountered a real life bunny boiler before. Having gotten on the wrong side of one, what baffles, fascinates and slightly scares me about them is the complete lack of rationality. Here’s what happened:

In the summer, a chap I knew broke up with his girlfriend in a most unfortunate manner. What made it so unfortunate (don’t get excited, I’m so not going into details) was the combination of it being pretty cowardly, incredibly unclassy, slightly bizarre and fucking hilarious. This meant that it spread through our group of friends like wild fire. I won’t describe it here because the people involved have been embarrassed enough. Quite reasonably, the ex was fuming. However, that was the last time reason reared its lovely head. The first thing she did was to splash it all over Facebook. Well done, dear, you’ve just fought unclassiness with unclassiness. Then she sent a very nasty message to a poor girl who’d gotten mixed up in it. Said girl, who is young and sweet and received this message on her birthday, was very upset. Facebook continued to be flooded with the bunny boiler’s proclamations about how badly she’d been treated and sympathy soon turned to apathy which turned to contempt. I, like everyone else, agreed that the chap had behaved pretty badly but, for fuck sake, get over it.

Months passed. The man’s reputation was in tatters and the bunny boiler was still desperately seeking attention. At some point in December, I decided that the chap was actually a pretty nice guy and decided to stop shunning his advances and give him a go. So far, it’s proved to be a good move. It was over six months since he split up with the pet poacher and she got wind of the fact that he was going out with me. My clash with the bunny boiler occured.

I knew her vaguely as I had been in a play with her a year previous but had not seen her since. We were hardly bosom buddies. It was surprising, therefore, when I received a Facebook message from this mad woman telling me that I was clearly ‘not a real friend’ to have gone out with her ex. What the hell? Thinks I, I don’t even know you, you silly cow. She then goes on to list the many terribly sins my now boyfriend has committed. None of which were news. What made my friends and I laugh about it was the fact that she had interspersed these facts with little jibes at me. None of us could figure out, for the life of us, what she had been trying to achieve (other than to make herself look like a proper bunny boiler). We agreed that if she had wanted revenge then a better tact would have been to have come across very sincere and concerned about what I could be getting myself into with this man. She didn’t though and I replied as follows: “Well, I never claimed to be your ‘true friend’ so I don’t know what that’s all about. Thanks for the warning but I’m not stupid or desperate enough to let some muppet take the piss so we’ll see. I really think in the meantime you need to get over it and move on.” She blocked me on Facebook.

So, what is it with these women? Why do they behave the way they do? What do they hope to achieve and how do they live with the humiliation of giving their ex’es so much time and energy? Any thoughts?

Leave a Reply to reallynotbridgetjones x

A single woman in her 30s who has random, bizarre and sometimes mundane adventures.